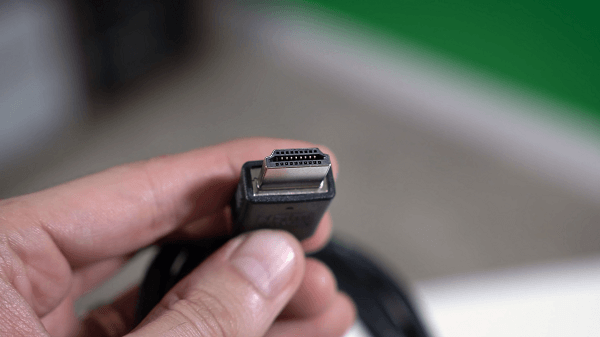 Removing a DisplayPort cable from your monitor and data source may not always be as easy as you think it should. The following troubleshooting steps can help you figure out how to remove DisplayPort cables quickly and easily in most cases.

If your cable doesn’t have a lock, you can remove it by pulling it out of the port like you would a USB cable. However, if it does have a latch, it will stay firmly in place unless you hold down a button or tab on the flat side of the cable connector.

Some DisplayPort cables have an additional tab on the side, which you must hold down at the same time as the other button to remove the connector from the back of the monitor.

How To Remove a DisplayPort Cable

Determining how to remove a DisplayPort cable is usually simple. If you can’t easily pull the cord away from the monitor, you can assume it has a lock keeping it in place. You can follow these three simple steps to unlock and remove the connector.

1. Find the Button or Tab

If your DisplayPort connector won’t budge, the first step is to determine if it has a release button to press. The release button will disconnect the cable’s hold on the port. Often, the release tab will have an arrow on it to indicate that you should press it.

The button or tab will likely be raised off the surface of the flat portion of the connector and have some give when you press it.

Sometimes, you will find that the connector has two release buttons to press. There may be one on each side.

Once you have located the button, you should press it down and hold it. If there are two release buttons, you will need to pinch them between your thumb and index finger so that you’re pressing them simultaneously.

You will likely feel the connector release when it disconnects its grip on the port.

3. Pull Out the Connector

After you press the button or buttons and the plug releases its hold on the port, you should easily be able to pull the cord away from the back of the monitor.

You will want to continue to hold down the button or buttons while you remove the cable so that it doesn’t reconnect.

How to Remove a Broken DisplayPort Cable

If you still can’t remove the cord from the monitor, your cable is most likely broken. There’s a chance that there is no repairable solution, but in most cases, you can still remove the DisplayPort cable with the right tools.

If the release button is broken, here are a few options for how to remove broken DisplayPort cables.

With a DisplayPort release button broken, one of the easiest ways to release it is with a binder clip.

If you can’t remove it with a binder clip, try using needle-nose pliers to remove it.

If all else fails, you can try to release the cord from inside, works with screens and laptops (the steps are the same).

Be sure to power off and unplug your device first.

You may need to disassemble the device to gain access to the latches that are holding the cable in place.

You can use this image for a reference to see where the latches hold on to the cable. Once you locate the latches, you can push them down with a pair of pliers.

Pull the silver hooks that are on the broken connector.

And then pull the broken cable head out by hand or with another pair of pliers. You may need to push down on the latches and pull on the hooks simultaneously.

DisplayPort Cable Not Going in All the Way

Here are a few troubleshooting tips to follow if you’re having difficulty plugging a DP cable into your monitor in the first place.

You May Not Be Using the Right Type of Cable

Your DP Cable May be Damaged

If you’re using a DP cable with a broken lock, you may not be able to push it into the monitor port. If the head is damaged, it’s best to purchase a new cable lest you not be able to remove it after forcing it in.

You May Have a Defective Connection Port

If you have the correct cable and it’s not damaged, there’s a chance that the problem is with the display monitor’s connection port rather than the DP cable. If the port is faulty, you’ll most likely need to replace your display monitor.

Here are answers to other questions about how to remove DisplayPort cables and related issues.

Why does my DP cable not work?

If you’re DP cable isn’t working, you’re either using the wrong type of cable, or your cable or port is damaged in some way.

You can quickly check if the cable is broken by placing a paper clip or thin metal piece into the cable’s open end. If it blocks the signal, the cable is bad. If it doesn’t stop the signal, check your connections first.

How do I fix my DP port?

If your DisplayPort port doesn’t have a signal, you can sometimes fix it by installing the latest drivers, disconnecting and reconnecting the cables, ensuring the monitor is working, or checking the resolution and refresh settings.

If you can’t update it because you don’t have a signal, you can try using the HDMI cable to ensure that the monitor is working at all and that the port is set to a resolution and refresh rate that works with the monitor.

Can a DisplayPort cable be too long?

DisplayPort cables must not exceed this limit. If the cable exceeds the maximum allowed length, the display port signals will fail or become slow.

Yes, DisplayPort is hot-swappable, so you can connect and disconnect our device and monitor while they’re powered on without damaging either device. You also don’t need to reboot your computer after hot-swapping.

Why does my computer say “DisplayPort no signal”?

If your computer says “DisplayPort no signal,” it indicates that you have an improper connection. Either your cable isn’t plugged in or your cable or port isn’t working.

If you’re having difficulty determining how to remove DisplayPort cables, it’s usually because you need to press a button to release them. However, if that doesn’t work, the cable is most likely broken and will require a little work to remove.