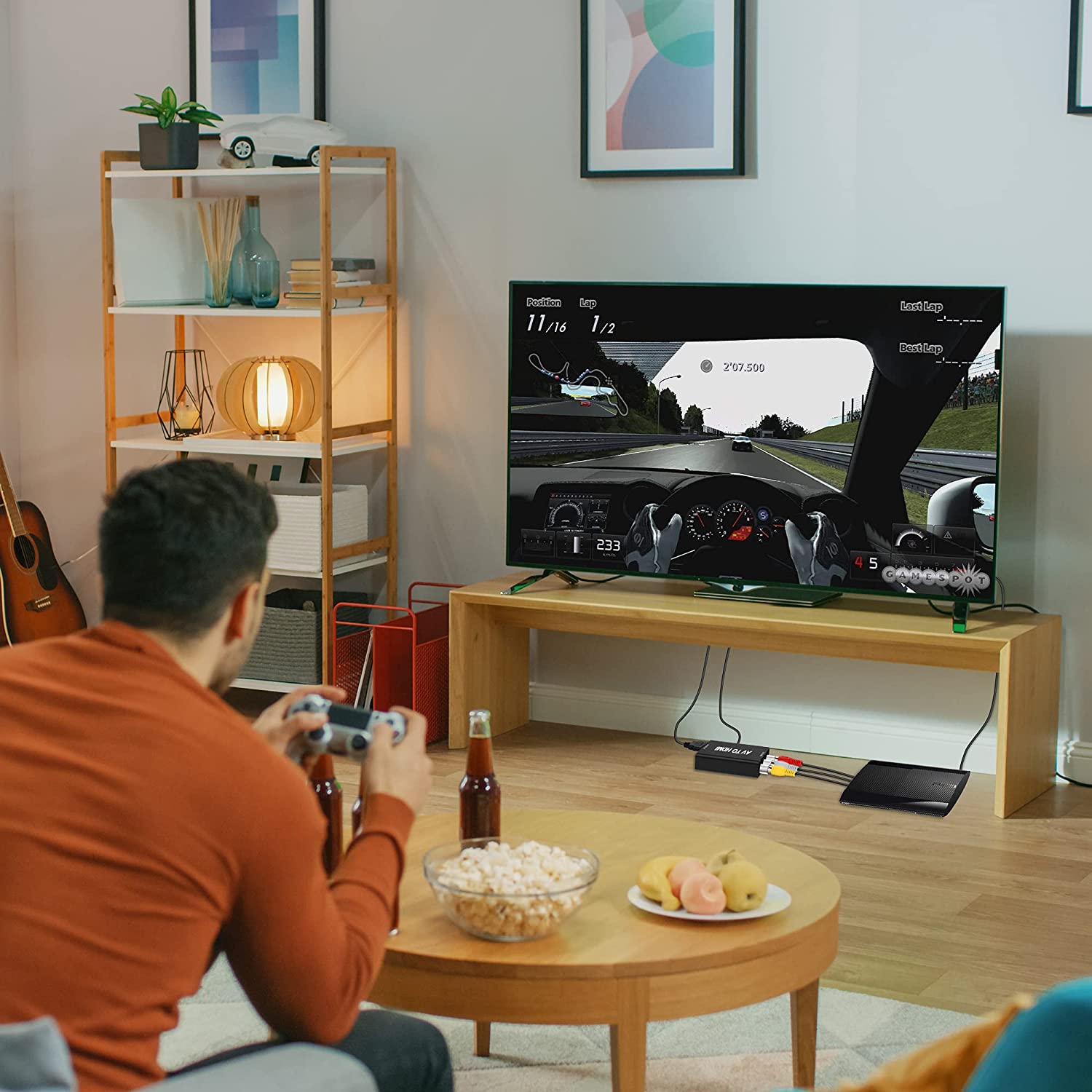 If you own an older audio or games machine you’ll be familiar with the two or three-port system that was capable of transferring two audio channels and an image from your machine to the screen or even a speaker setup. These are a type of AV cable, the three-port system is often referred to as RCA. In fact, there are two types of AV cable

This is the older version of AV technology. It consists of one cable that can carry a video image. However, the image is compressed to allow it to be transferred along the cable, this reduces the quality that a composite cable can offer.

The composite cable plugs directly into the AV outlet on your device. However, it is only capable of carrying a video signal, audio will need to be transferred via a second cable.

In contrast, the component AV cable has three ports and three cables, allowing it to transfer higher quality video as the image is split into three parts. This increases the amount of data that the cable can handle and improves the image. But, it is still not HD quality.

The three-port AV connector is capable of carrying audio as well, it doesn’t need additional cables.

The physical cables used to connect devices are actually the same, it’s the output from your device that affects your image quality. Of course, it may seem strange to think about not being able to access high-definition images but that is still true for many electrical items.

Naturally, televisions have improved and many modern ones no longer have AV or RCA ports. That means your AV signal needs to be converted from analog to digital, allowing it to play through the HDMI port on your screen.

It should be noted that the AV to HDMI converter doesn’t always improve the quality of the signal, some converters simply allow you to display images and sound from older devices on your television or chosen screen. Others include an upscaler that can improve the quality and detail of the image.

The first option is listed as an Amazon’s choice. The Ablewe AV2HDMI Upscaler has three RCA input ports, allowing you to plug in an AV composite or component cable. It then converts the analog signal into digital and allows you to play 720p or 1080P on your television.

This converter is ready to use, simply plug it in. However, you should note that it needs its own 5V power supply. A USB cable is included for this purpose, note that this is not a AV To USB Converter.

It should be noted that users have found the converter can take several minutes to process the initial image and display it. You may see a blue screen while waiting. After that, it works perfectly.

The TaiHuai AV to HDMI converter is smaller than the Ablewe offering. Instead of having 3 ports, it has four attached cables with female connectors at the ends. These allow you to plug in composite AV, component AV, and even S-video.

At the other end of the box is the HDMI connection, simply plug an HDMI cable in, and away you go.  It should be noted that, for most devices, you’ll also need the AV cables to connect this converter to your system.

A simple switch allows you to choose between 720P and 1080P, depending on which looks better and suits your needs.  It still needs to be connected to a power source via the supplied USB cable.

Reviews are generally positive but it is worth noting that most users point out the impracticality of having female ports on the device, male ports would allow it to connect directly to your device and save you a cable.

If your budget can stretch a little further then it is worth considering the Tec UHD AV to HDMI upscaler. This converter can handle composite and component AV connections and upscales the images to HD quality. The box is surprisingly small yet offers 4K or 2K images through a standard HDMI port, you’ll need to supply your own cable.

It has an S-video port and three AV female ports to receive your AV signal. It also has a 5V port, you’ll need to plug in the included power cable to get the device to work.

You can choose the zoom setting, resolution, and the source. Again, it is simple to use, just plug it all in.

Users confirm this works very effectively and is a good investment. Although, if you want to get into the technical detail of the image you’ll be looking at a more expensive option. However, for most people, this is an excellent and reliable choice.

If you have more than one older device and would like to convert the signal without having to plug and unplug items, you should consider the LVY 2AV to HDMI converter.

As the name suggests, this converter has two sets of female input ports, allowing you to plug in two devices via component or composite AV. You will need the cables to do this.  A simple button on the top allows you to switch between input devices.

This does mean the box needs to be easily accessible. You can also choose between 4:3 and 16:9. Between the input cables, you’ll notice an LED light that tells you the unit is on.

On the other side there is a standard HDMI port, a power switch, and the micro-USB port that powers the device through the included USB cable.

Reviews confirm that this converter works well. However, it doesn’t upscale the image. The image is the same as if you could connect your device straight to the television.

The final offering on this list is the Zi Youren AV to HDMI converter. It is similar in appearance to all the other offerings. However,  it is very low-priced and still offers the possibility of upscaling, giving you either 720P or 1080P. All you have to do is select via the switch on the box.

It has a standard HDMI output and three female AV ports. It needs a 5V power supply, the connection is on the side and the cable included.

Users confirm this is a reliable budget option and it’s simple to use. If you’re on a low budget this is a great starter option. You can always upgrade in the future.

Additional Factors To Consider When Purchasing An AV to HDMI Converter

If you are in the market for an AV to HDMI converter then you will find the ones offered above make an excellent choice for your system. However, before you buy you should verify the following:

A key part of purchasing anything is to know who you are buying from. You should verify the manufacturer of the AV to HDMI converter. Ideally, you already know and have used them before, this will help you to have confidence in your purchase.

However, if this is not the case then you should speak to friends and family to see if they have any experience. Their opinion can help you to decide whether to buy or not.

If this isn’t any help then you’ll want to check on social media and online forums. They, like this guide, will advise you of the best options available. You’ll find honest opinions from people that have actually used the product, allowing you to buy in confidence.

As mentioned, some AV to HDMI converters simply transfer the signal, others upscale it. That means you need to decide which is more important to you. In general, using an AV to HDMI converter with a game console you’ll want the best quality signal possible.

However, if you are transferring an old video, you may want to retain authenticity by keeping the signal quality as close to the original as possible.

If it will be plugged in and stay in-situ it shouldn’t be at risk of damage and, therefore, will be durable.

Take your time when choosing an AV to HDMI converter, this will help to ensure you get the right one for your needs. Don’t forget that your situation is unique, the best converter for you may not be the one that your friend has. Also check out PC to TV converter.

Instead, take a look at the high-quality converters featured above, decide whether the image needs to be upscaled or not, and then order your AV to HDMI converter.